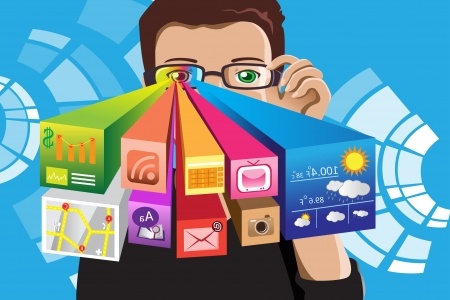 Virtual reality is an online environment that we can immerse ourselves in, exploring and interacting with the world it creates. Most people think of computer gaming when you talk about virtual reality (VR), but things are changing. Many industries are now using VR as a means of up-skilling employees in ways that not so long ago we would have thought impossible. VR doesn’t just provide a 3d training environment, it gives the user a real life experience which includes sound, vision, touch and motion.

According to a report last year by MarketsandMarkets, the VR market is expected to reach more than 25 million users by 2018 so it’s far from being a new market or something that only a few have experienced. The growth in VR caused Facebook to sit up and take notice and resulted in them last year buying Oculus VR for $2 billion, due to its virtual reality headset, even though it was a relatively new company.

So what are Google doing about VR? Well you might be confused by the VR related headline, ‘Google brings cardboard to the classroom’ and wondering why the classroom needs cardboard. Although I’m sure building models out of breakfast cereal boxes is still popular with kids in schools, in fact Google is actually taking virtual reality into the classroom. A year on from the launch of the cardboard DIY virtual reality headset, looking very like the old View-Master, if you can remember that far back, they are now available in a whole range of materials.

What Google has done is to make virtual reality accessible to everyone with prices starting at around £13 or $20 for a Cardboard kit which gives you everything you need, with the exception of the iPhone or Android device, and accommodates smart phones with a screen size up to 6”.

For some time now I have been watching the wearable technology space for a meaningful move into education, however it hasn’t really happened, mainly I think because of price, but the inexpensive Google Cardboard has a lot of potential to make significant changes to education. Google is leading the way, as one would expect them to be, by launching Expeditions, which is a kit made up of a Cardboard and the phone to use in it, along with a tablet for the teacher. The teachers tablet and students’ phones synchronise and the teacher can take the students on a virtual trip to any place in the world.

Where schools, universities and private training providers are using VR it has had an amazing impact on students’ learning experience. Watch the video below to see how children are using Google Cardboard. Examples of practice in industry and further and higher education tend still very much to be centred around engineering and health care, but I don’t think it will be long before we see more VR being used across other industries and in a larger proportion of educational establishments.